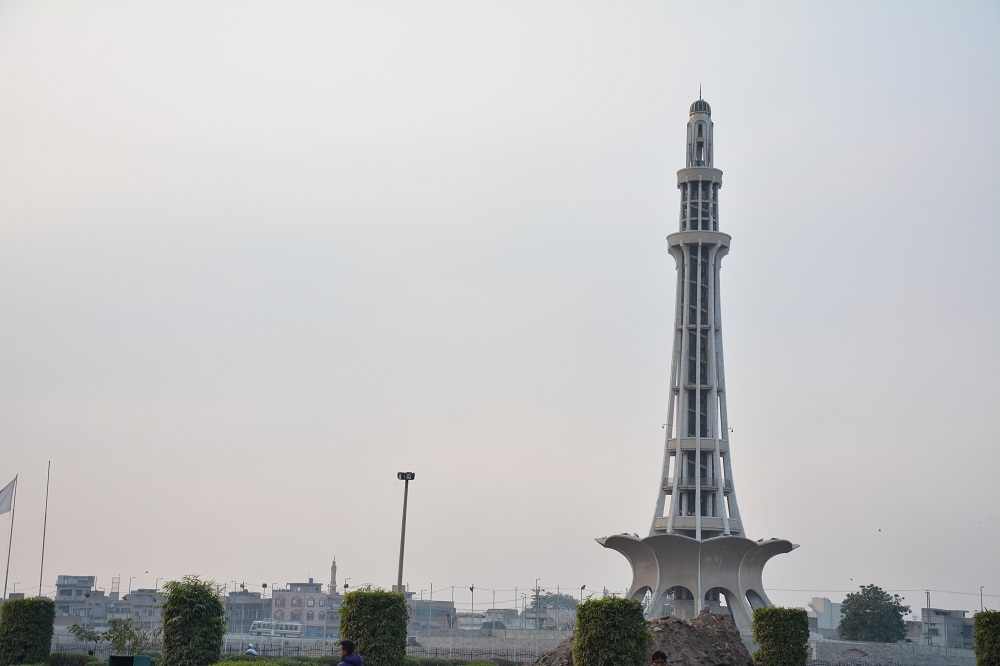 Lahore the 2nd largest city in Pakistan located on the left bank of River Ravi is the provincial capital of Punjab, a province of Pakistan. This great city is divided into two parts commonly known  Androon Lahore ; the inner walled city and & Subarban  Lahore, the outer city. The “Androon Lahore” is a very old city dwelling, with walls  around the city and thirteen Gates of the city. City of Lahore is historically very old   city and by some folklore tale it was founded by Rajkumar Lav, one of the Sons of  Raja Ram Chandar, a story character in Indian Mytholgy.

This city of Lahore has continuously been a regional capitol for various empires and  Shahi kingdoms from the time of known history, In the 11th century the Ghaznavids  made Lahore their Capitol, in the 12th Century Mughal Empire made Lahore a local  Capitol from the Fourteenth to sixteenth Century, the actual Sikh extension within  the early 18th Century. Lahore has been the administrative center of the Punjab under  the British Raj from the middle of nineteenth Century to early twentieth Century.

Lahore remained the traditional capital of Punjab for centuries, the way some places carry the name of local culture, the center of human intellectual growth where such places become important for those who like to enjoy the nostalgia of traditional thoughts,  the city of Lahore has been regarded such a place in the minds of people of  the subcontinent.  Having gone through so many ups and downs of history and being exposed to various cultures  of invaders of the subcontinent, Lahore has become a whole world in itself carrying a  multitude flavor of the past and the willingness to absorb cultural changes of the future.  From Ibn-e-Batuta to Amir Khusroo to Abu-Rehan Al Bairooni, and from Mughal era to  Victorian era of Britain, from buildings and gardens to forts, though the diversity of Lahore is some times unbearable for the locals, yet the life is still full of rich cultural and food tasting pleasures for the body and soul.

The Moto of Lahorites is

In English it means “Lahore is only Lahore and if someone hasn’t visited Lahore is not born yet”.

Let’s start to explore the historical Places of Lahore,

measure about 427Meters east-west and 335Meters north-south excluding the

fortification wall. The fort of Lahore has many extensions, palaces built by Emperors

of Mughal dynasty. It has three main gates for entrance built by different emperors

Gate. This was the entrance for general public to enter the fort to attend the  Emperor Akbar’s Court in Devaan-e-Aam, at the same place Fifth Emperor of Mughal  dynasty Shah Jahan, also used to hold meetings with commons of his  kingdom. British erected the guns seen outside this area, sometimes between 1857- 1947.

Jahanghir’s Quadrangle is among the first quadrangles laid out during Akhbar’s stay in Lahore. The Construction of the Quadrangle started by the Emperor Akhbar himself but completed by his son Jahangir in 1617-18. On one side there are royalty guest rooms where as in the middle is “Bari Khoabgah” the sleeping chamber of Emperor Jehangir which contains lot of pillars containing various animals and there are fountains in the  middle of the courtyard.

Diwan-e-Khas (Hall of Special Audience), was constructed by Governor of Lahore

Wazir Khan on the orders of Emperor Shah Jahan in 1645 A.D. It is an arched

Pietro dura work (The art of inlaying semi-precious stones into white marble). All the walls of pavilion were made of skillfully carved marble screens but British destroyed most of the structures and converted into chapel.

Moti Masjid (Pearl Mosque), was built in 1645 by the Mughal Emperor Shahab- uddin Muhammad Shah Jahan. As per historic accounts it is stated that the mosque  might have been built along with the doulat Khana Khaas-o-Aam of Shah Jahan in the  Lahore Fort, It is a small, though an irregular octagonal hallway of the mosque  hardly 21’ x 25’. Mosques with same name, are found in Agra and Delhi it is completely built of white marble that was brought from Makran. People believed that their prayers are answered in this mosque.

Emperor Shahjahan built ShahBurj Gate in 1631-1632 AD under the supervision of Ma’mur Khan. This door was a private entrance of the Royalty leading to the Haram portion of the Fort and to Shish Mahal. There is a pictured wall attached to this gate started by Emperor Jahangir in 1624-1625, all the pictures are specimens of Iranian Art, incomparable for it’s vastness, variety of designs  and magnificence of glowing colors which still retain it’s freshness and brilliance  after 400 years.

Sheesh Mahal built by Shahjahan for one of her beloved wife Mumtaz Mahal.This

Celestial looking (Sheesh Mahal) mirror palace is located in north-west corner of the Lahore Fort. It is one of the most majestic palaces of the Mughal period. This palace got constructed during the reign of Mughal Emperor Shah Jahan in 1631-32. It had Pietra

Similar types of halls are found in the contemporary palace of the Agra Fort too. It was not in a good condition as its roof was very near to collapse but Government and local authorities are trying to restore it.  Underneath Sheesh Mahal structure, there is Royal Summer residence and some private temporary residences for the prince’s girlfriends. The structure of the rooms have such echo system designed that whisper in one corner clearly heard in the other corner of the room.

& Lakh (100,000) room as it’s cost which was around 900,000 rupees at that time, an exorbitant amount at the time, hence the Naulakha Pavilion. It was built by fifth Emperor of Mughal dynasty Shahab_uddin Shah Jahan and is a prominent white marble personal chamber with a curvilinear roof, located beside the Sheesh Mahal courtyard, in the northern section of the Lahore Fort, Pakistan. The structure was originally inlaid with precious and semi-precious stones and overlooked the River Ravi flowing beside the Fort.

Lahore Fort. The Shahi mosque was built under the patronage of the sixth Mughal

Emperor, Mohy uddin Aurangzeb Alamgir. It was completed in 1673 under the supervision of Aurangzeb foster brother Muzaffar Hussain (also known as Fidaie

Khan Koka), who was appointed governor of Lahore in May 1671 and held this post till 1675. He was also Master of Ordinance to the emperor. The Badshahi Masjid is the 2nd largest masjid in Pakistan and ranked 5th in the world. Badshahi Masjid is closely related to the Jamia Masjid  Delhi, India, which was built in 1648 by Aurangzeb’s father, Emperor Shah Jahan.

The Hazuri Bagh Baradari is a twelve door structure of white marble located in the Hazuri Bagh of Lahore Pakistan, located in a space next to the Tomb of Iqbal between Great Badshahi Masjid (Shahi Mosque) and the Lahore Fort. This structure was built by Maharaja Ranjit Singh, a Sikh ruler who took over Punjab in 1818 for a short period of time after the fall of Mughal Empire” before the British took administrative control of Punjab in 1857. Elegantly carved marble pillars support delicate cusped arches. The central area, where Maharaja Ranjit Singh used to hold court proceedings, has a mirrored ceiling. The pavilion structure consisted of two stories until lightning in 1932 damaged top story.

Roshnai Gate is one of the thirteen gates of the Walled city of Lahore. It was the main entry point of the Rulers and the other nobles during the Mughal and Sikh Periods. Its extended height and width is testament to its use by emperor’s caravans of elephants to enter in the city. River Ravi used to flow with the northern walls of the Lahore Fort and Shahi Masjid in 1800, so to facilitate the travelers gate used to be illuminated during nights hence named as “Roshnai Darwaza”. Roshnai Gate is considered to be the oldest gate and is only city gate to be preserved in it’s original form. This door also leads to the Sikh Gurdawara which was built during Sikh  Regime in Punjab between 1818-1857.

Mosque and the Lahore Fort where both the grand structures (the Mosque and the Fort) face each other. In Pakistan, Iqba’s poetry is considered the major inspiration for the demand of separate homeland for Muslims in British India, and is revered in Pakistan as Muffakir-e-Pakistan (The Thinker of Pakistan) or Shair-e-Mashriq (The  Poet of the East). The architecture of the Tomb reflects a combination of Afghan and Moorish styles and is constructed of red sandstone brought from Jaipur and building marble from Rajputana (India). Lapis Lazuli for the tombstone (used for Mughal Emperor Babur’s tomb, was received from the people of Afghanistan as a  gift. There is a saying that Mustafa Kemal Ataturk brought dust from Maulani  Rumi’s tomb and sprinkled during his visit to Mausoleum.

Walled City Lahore, Lahore Fort and grand Badshahi Mosque. The Fort Road Food Street is well-known for Lahori Cuisines. Area originally known as Heera Mandi was attributed to Maharaja Ranjit Singh minister Heera Singh, also known as Shahi Mohallah . It was a red-light district and a shopping area in Roshanie Gate Lahore. The market was originally the center of the city’s music and tawaif culture from the Mughal era, where the rich used to send their kids to learn etiquettes. However, under the British colonial period it became a hub of music and prostitution.

Lahore is famous for traditional and international foods. The best traditional foods are available on the streets of Lahore. There are few Food Streets developed in Lahore. Old AnarKali Food Street, Fort Road Food Street, Gawalmandi Food Street  and MMAlam Road food street. The location of Ford Road Food Street is opposite to the Shahi Mosque and Lahore Fort, the Restaurants serve food on rooftops from where the Walled City of Lahore presents nice views of the Mosque, Fort, Iqbal Park and the walled city.  Cuckoo’s and Haveli Restaurants are famous.

Every national monument has a tale that shows the struggles and sacrifices of their founding fathers for formation and establishment of homeland.

President Ayub Khan built a monument (Minar) known as Yaadgaar-e-Qirardad-e-Pakistan in 1960, in the memory of passing the Resolution for separate homeland for Indian Muslims. Later it was given the name Minar-E-Pakistan built exactly at the same place where the resolution for the Pakistan was passed  on 23rd March 1940 known as Qarardad-e-Pakistan. Minar-e-Pakistan is one such monument that signifies an important stone laid in the creation of Pakistan a gathering that led to independence. It is the famous and historical place, which is located in greater Iqbal Park.

Minar-e-Pakistan is among highest towers in the world. The height of Minar-e-  Paksitan is 201 feet (62meters). It is the best visiting place for tourist. This park consist of  many beautiful gardensand musical Fountains around it, which capture the attention of people. Every year Millions of peoples visit Mina-r-e-Pakistan from all over the country